Happy Fathers Day to all Dads out there! Here at Swamp Creek Farm we had a great bar-b-que by our Dad in residence and Chief Bar-B-Quer, Tom. As usual, the meal was delicious. We had grilled hot dogs, chicken, and mushrooms, potato and cucumber salad, and baked beans. A gallon of iced tea quenched everybody's thirst on this sunny 84F day. My Dad came over as did my sister, Mary, and her husband, John. No nieces or nephews (alas, all are grown and flown), but it was nice and slow, easy conversation around a fine meal. Course, we'll have to watch out for that bear tonight -- they love bar-b-que, too!

After Dad and John and Mary left, the dratted big fox appeared -- must be figuring on getting his Fathers' Day dinner. The dog ran it off a couple of times, but because it was still hanging around, Tom got out the shot gun and is waiting for it. I will be so glad to get rid of these foxes! Tom set out a trap for the raccoons but his deer cam caught the bear getting the bait and beating up the trap.

Yesterday, Lara and I finally made it to the farmers market in Phillips for our first Saturday market. Alan and Diane Barkstrom were there from B's Flambeau Acres, Tom and Jim were there -- vendors I hadn't met before who sold llama manure and lettuce, and Diana Nutt and some friends were there raising money for a rodeo group. That woman is another marvel!

I was thankful for the good weather; it was hot, but at least there was a nice breeze. I was able to keep Lara in the shade. Pricewise, we broke even (we have to sell at least $18 to make the price of gas to the market) and that is a good first day for us so I have positive expectations for the rest of the market. Lara was good talking with the customers. We had French Breakfast radishes, Nichols Mild Mesclun Mix, Noble Spinach, and Paris Island Cos romaine lettuce. Not much, but it was a start. Despite being heavily iced, the mesclun mix wilted horribly; the cos held up great, and so did the spinach and the radishes. Surprisingly, we sold all of the radishes -- you never know what the customers will be looking for! I thought the mesclun mix would sell, but every customer wanted to know what it was and they didn't want to try it. I thought for sure it would sell, but it didn't do well at all. Looks like I'll have to do some research and education to get people familiar with mesclun. The cos and spinach sold all right, and when we got home with the left-overs, there was just enough to mix together for a nice salad for us. The wilted mesclun went to the chickens. If the day had been cooler I would have brought up the pressure canner and canned the mesclun like spinach -- canned lettuce tastes like a mild spinach and I can it the same way I do spinach. 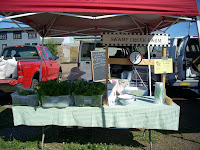 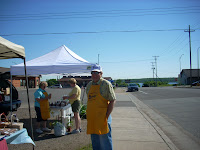 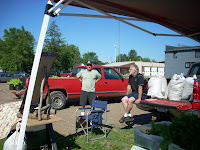 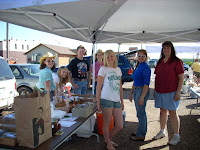 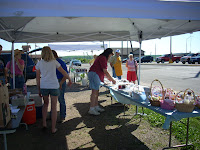 Overall, it was a pretty slow day for the market because of all the other events going on: it was Fathers' Day weekend, the weekend for the longest garage sale in the state, and the Phillips Czech Festival was in full swing. In fact, after the market, Lara and I took a quick run over to the Festival. It was absolutely packed with people! We checked out the vendor and crafts area where I bought Lara a "Czech Princess" t-shirt, and I bought a Czech Museum tote bag for myself before hitting the bakery where we picked up a loaf of dark rye bread and two packages of Bohemian kolackes, one for Tom and one for my Dad. On the way out, we stopped at a stand where someone had an ice cream machine set up -- the kind you can purchase from Lehman's -- and we sampled a cup each of wild raspberry and maple nut ice cream. That was about the best ice cream I ever ate. By that time, we really needed to get home as Lara was starting to look sickly -- her medication doesn't let her tolerate sun and heat -- and she needed her afternoon meds. All that fresh air must have really made her sleepy because when I went in to put her to bed at 8:00 p.m. she had actually transferred herself onto her bed from her wheelchair and was waiting for me! She was extremely pleased with herself. (And I was proud of her, too!)

Tuesday is the Wisconsin Acidified Canned Foods Training for Small Businesses course at the Spooner Ag Research Station, and I'll fill you in on how that goes Tuesday night -- if I can stay awake; it's a 3 1/2 hour drive each way, and I'll have to leave about 4:00 a.m. to get there by 8:00 a.m. I'm still imaging my dedicated farm stand with certified kitchen micro-business incubator . . . . Anybody out there with cash to blow want to gift me about $300,000? LOL.

Have a great Fathers' Day!
Posted by ElderberryWine4u at 2:12 PM