Despite the purchase of a bug baffler shirt (which I am VERY pleased with) and numerous days and evenings of watching with rifle in hand, the foxes (yes, I discovered there are two of them again) have whittled me down to just six hens.  There was a thicket of trees and shrubs on the east side of the house that was one of their hiding places, so I spent one day limbing up and thinning out that thicket.

I haven't seen a fox since, but I know they are still out there.  I heard Dad shooting one day (he watches Mary's chickens) and you can hear the sand hill cranes and crows squawk when they are being bothered.  My neighbor has bear hounds and they usually sound off when a critter is around; that gives me a heads up to be more watchful, too.  Yesterday Tom helped me put up a second fence that is 7' tall around the existing fence that surrounds the chicken coop.  I have come to the conclusion that I cannot let the chickens run and expect to have any kind of flock or regular supply of eggs.  As much as I hate to keep the chickens fenced, it is something I have to do if I want to keep chickens.  I live just too deep in the woods.  When I get a chance I will enlarge the chicken area to include the wild roses that they love to hide under.

I love the scent of wild roses.  Tom thinks they smell like a funeral parlor.  Sometimes I wish he'd just lie when I ask him some questions.


Can you see the mesh of the second fence?


I am determined to raise my own flock of chickens -- preferably Dominiques.  Tom doesn't like my chickens.  He was not happy when these arrived yesterday:

I ordered 15 pullets and 5 cockerels.  Cackle Hatchery sent me three extra chicks.  How nice! This Fall I'll pick the best to keep and butcher the rest.  I figure learning to raise and breed my own flock of chickens is like studying for my General class ham radio license -- I'll get the hang of it at some point and accomplish the deed.

Well, that's all I can think of to share with you right now.  Summer is a time for eating cherry pie so I think I'll have a piece.  Cousin It says my pies "have heart".  A great compliment like that makes a piece of pie go down all the sweeter!

P.S. to Mavis -- Spinning, weaving, and knitting belong to my "winter" tasks so right now I'm not weaving anything.  I am still practicing moving the shuttle back and forth to get decently even edges and playing with the pedals to study how different combinations create patterns.  This winter should be fun though!

In Between the Rain

I have found myself so busy this summer dealing with infrastructure issues that I don't know where to begin with this post!

First off, my egg refrigerator died and I wound up pickling about 4 dozen eggs and tossing another 20 dozen eggs into the compost before taking advantage of an appliance sale at Sears to buy a new energy efficient refrigerator that I promptly set up in the garage.  I was so happy that I was one step closer to getting an egg license so I could sell my eggs at the farmers market. Then I heard a story about another vendor at the market who was trying to work with the state food gestapo to be able to sell her eggs at the farmers market and who was told she could not have her egg storage refrigerator in her garage.  Supposedly she moved the refrigerator and had to scrub the new location area at least five times before the inspector was satisfied, and then for some unknown reason (excuse?), the woman still wasn't able (at least at the time I heard this story) to obtain the required state license that would allow her to sell her eggs at the farmers market.  As I haven't been able to attend the market yet this year and I don't know the woman's name to be able to contact her, I don't know if she ever got her license.  When I finally make it to the market I'll try to find her and get the whole story from her directly.  My blood boils when I hear this kind of garbage. Anyway, it looks like I will just sell my eggs directly from the farm.

The ground in the field dried out enough by the third week of June that I was finally able to plant half of my garden, but wouldn't you know it, my trusty BCS 722 was the next tool to die on me.  That BCS was my only heavy duty ground working machine.  In the nine years we've had it, that machine has cut hay, broken ground, tilled and hilled the soil for three garden locations, and skidded logs.  Its demise completely put the kibosh on field and garden activities.  We had to plant Tom's garden totally with hand tools.  (Breaking up the ground for his potatoes was pure nightmare!) Just today, the fix-it man called and said that there were two bent rods in the engine so he ordered the necessary parts.  I have no idea when to expect my BCS back.  I actually feel something akin to withdrawal!  I told my husband that when we do get it back the first thing I'm going to do is cut the grass in the field and break a new section of ground out in the field to plant with peas or beans as a cover crop so it will be ready to plant next Spring.  In the meantime, I dismantled the creek side of the field fence (lots and LOTS of wire -- Ugh!) (I still have to move the pile of posts; I'm going to use them to outline a larger creek buffer zone that I will fill with transplanted trees.) and started building three more garden boxes in back of the house. 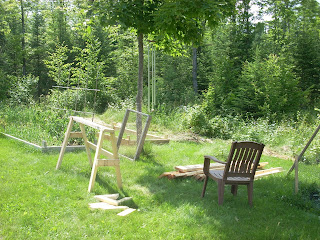 I had to first dig up my blackberries and put them in pots, and take down the blackberry trellis. You may be able to see the first box frame in the center distance of this picture.  The ground slopes downhill from that point to the back end of the west marsh, and I had to cut back the thick brush you see. I was very careful cutting down that brush because the area is very close to where Mr. Badger's house is and I don't want to irritate him, if he is still there.  (It's been a while since I've seen him.)  I was able to put one more box frame next to the one you see before the ground started sloping too dramatically, and I put the third box frame next to the greenhouse.  I covered the interiors of the frames with old newspapers and magazines, then covered those with chicken bedding from the pile I made when I last shoveled out the chicken coop.  Now I have to sift soil from my "dirt hole" and fill the boxes to the top before planting in them.  Tom wants to buy some blueberry bushes next year, so we will put them in the box next to the greenhouse where they are sure to get lots of sun.  I am not looking forward to sifting that dirt because the dirt hole is getting pretty deep and it will take a lot of up-and-down on a ladder.  The water table should be about 15' down and when I finally hit water I will line the hole with bricks and wire shelves to make a spring house.  Guess I'll have to start a new dirt hole then!  Anyway, I have enough lumber left over to build the  passive solar window heater for the chicken coop that I've been wanting and the roof braces we need for the greenhouse so it doesn't collapse from snow load in the winter.  I may even have enough wood to cobble together a small solar dehydrator.

Next, we ordered 11 cords of wood from a logger.  We figure the wood should last us about three years. (Tom LOVES dry firewood.) 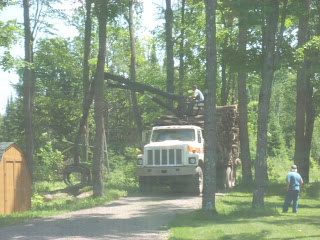 Then, the engine in Dad's big wood splitter died and is being repaired, so my sister and her husband and Tom and I each bought wood splitters.  When Dad's splitter is fixed we should have plenty of back up tools for making firewood -- very serious business when you live this far north.

The summer saga continues in the next post, but before I leave you, here is a little "something for Cousin It who recently visited Area 51 during her vacation:


Posted by ElderberryWine4u at 3:32 PM No comments: