I can't believe we are going into the last of November already.  Time is simply flying around here.

I'm another year older. (Sorry, no picture this year of my German Chocolate birthday cake; it was inhaled before I could get a picture of it! But here is a pic from another year.) 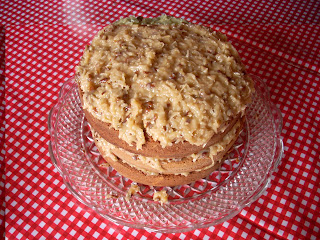 For my birthday I took a drive to the Yarn Barn in Phillips.  I bought enough yarn for two practice traditional style gansey sweaters and enough self-patterning sock yarn for two pairs of socks. While I mosied around the store I came across some spinning wool from my friend Jane's farm, Autumn Larch Farm.  I'll have to tell her I bought some of (her ram) Noah's wool. Then, from Interweave I bought a DVD called "Three Bags Full" about what you need to know to buy a good fleece.

The cold weather has settled in, and we have about two inches of snow on the ground.  Right now the temperature is -14°C and dropping.  Good for hunting!  Tom went out with his rifle early this morning.  A few weeks ago he shot a doe with his bow, so this morning he was going to try to get a buck for our daughter, Sarah.  (Doe tags are all sold out.) Lo and behold, by the time I got up, he was already back to the house and waiting for me to help him drag a buck out of the woods.  He says he thinks it is the biggest deer he's ever shot.  It was a big deer, for sure.  Thankfully it wasn't too hard dragging it out of the woods and load into the back of the truck.  Then, Tom cleaned up and headed to Butternut Feed Store to swagger -- I mean -- register the deer.

Naturally, the feed store was already crowded with hunters shooting the breeze and checking out each other's deer.  Tom's deer was the biggest one yet in the day.  Ooooh.  Big deer.  It's a guy thing.  Tom was supremely satisfied.  There was a woman DNR warden there who wanted to check Tom's deer to see how old it was.  She opened the deer's mouth with some contraption and checked the teeth.  She said it was 3 1/2 years old.  It would have been an 8 pointer, but one of the antlers was broken off.  "Scottie", the butcher, (whose shop is conveniently across the street from the feed store) said he could tell the antler broke off in a fight with another buck.  All in all, it was a good day.

I have been studying for my General Class ham radio license and am doing pretty well with the practice license exams on e-ham.net.  I hope the weather is good for me to drive down to Wisconsin Rapids on December 14th.

I've also been working to finish sewing the quilt blocks for the quilt I started last year. Only ten blocks to go.

I got Tom to mooch some tallow from the butcher for me, and I rendered it down for a future soap making project.  It was the first time I rendered tallow, and it turned out beautifully.

I am still dehydrating my tiny onions, and I bought a bag of cranberries to turn into craisins.  My first and second attempts turned into an awful mess, but I am determined to learn how to make them well.  So far, all of the recipes for making craisins I've found on the Internet are wanting in final presentation so I am going to give it another try and use the dehydrator instead of the oven. If I get them to turn out well (i.e., like raisins), I'll tell you how I did it.

Turkey Day is coming this Thursday and we will have a house full for dinner.  I ordered a pumpkin cheesecake from Junior's in Brooklyn, NY as a special treat. If I don't get to post before then, I wish all of you a safe and happy holiday! 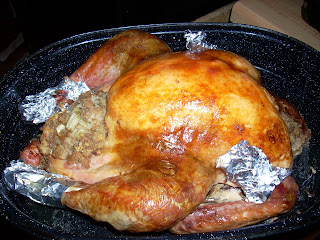 Posted by ElderberryWine4u at 8:06 PM No comments:

Salutations!  I'm finally back to tell you about this year's Small Farm Conference.  It was a long day but lots of fun.  Our host for the conference was Stoney Acres Farm in Athens, Wisconsin.

To start the day, my sister and I always tend to get to appointments early, and this was no exception.  We decided to stop at a farm shed sale we saw a road sign for before going on to Stoney Acres.  We wished we had brought a truck!  The lady had some really nice furniture and her shed was absolutely stuffed with things she wanted to sell.  You will be happy to learn I was very good in restraining myself.  I bought a beautiful, still in the box, wooden salt and pepper mill set for 50¢ and I bought Tom an old gas can that the woman said she thought was from an Army jeep for $10.00.  She didn't know how old the can was, but it was sound. There was "US" stamped on the bottom of the can and it looked like something that would fit on a jeep.  (And Tom did like it, too, when I gave it to him.)

Then we arrived at Stoney Acres farm.  The first thing that caught my eye was the solar panels on the shed. 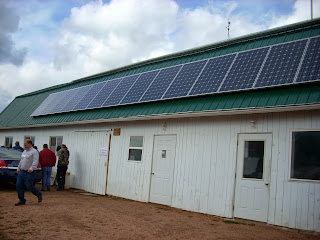 This long shed held a large, what I would call a community room, a second smaller community room, a commercial kitchen, bathroom with shower, large produce cooler, and somewhere in there was the solar battery bank and charge controllers that I could not find.  I was really interested in the solar set up because I am reading this book while studying for my General class ham license upgrade. There just wasn't time to see everything.

I really liked this oven.  The farm owners bake pizzas they make from their farm produce in this oven and sell them.  And boy, are they good! 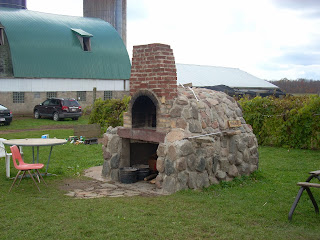 Here's a shot of some of the rows of grape vines that are growing between the barn and the big shed. 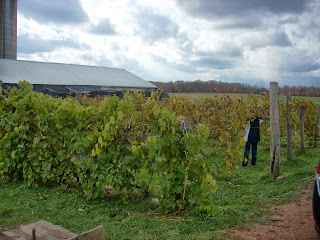 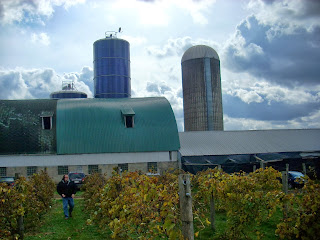 This high tunnel was still loaded with tomatoes! 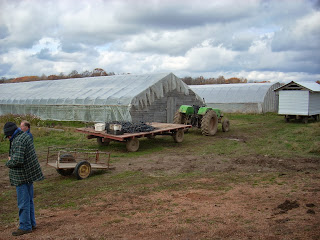 You can see Kat, one of Stoney Acres' owners, in the center of this pic, giving a brief run down of the farm's diverse activities.  At first I wondered why she wasn't wearing a coat (it was FREEZING), but then I realized that she was very pregnant. (I remember being that way!) (I think it's another boy ;D) 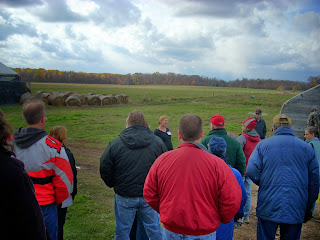 Garden boxes done for the season. See the long dresses on the little girls?  There are a lot of Mennonite farms in this area. 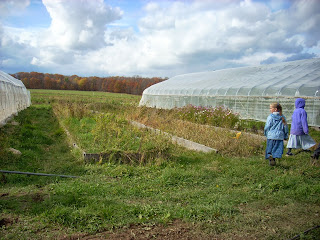 Unfortunately, at this point my camera batteries died and I was unable to get pictures of the 1 acre of raspberries, apple trees, additional high tunnels, sugar house, happy pigs, really neat pastured turkeys, and everything else this wonderful farm contained.  You should have heard those lovely turkeys singing while they watched us.  They were grazing on a great patch of pasture mix that looked like peas, oats, and vetch.  And I would have liked to walked down to the sugar house, but the actual farm tour was only about 45 minutes long.

The learning sessions I chose to attend were Berry Production and Maple Syrup Production and Marketing.  Brian Smith gave the berry production talk.  Boy, I learned a lot about raising raspberries and blueberries! And Ray Melander and Dan Marzu gave a wonderful talk about maple syrup production.  You can really spend a lot of money making maple syrup. Sheesh! Here and here are links to some more information if your are interested.

There was a young woman attorney who spoke about various legal farm issues named Rachel Armstrong.  As an old, former legal secretary I would give her a thumbs up if I needed an attorney.

For supper we were treated to some of the farm's homemade pizzas.  I think this new venture is a winner for them.  After supper, Mary and I trekked homeward.  It was a long and very cold but enjoyable day.  Good luck to Stoney Acres and thanks for hosting the North Central Wisconsin Small Farm Conference! 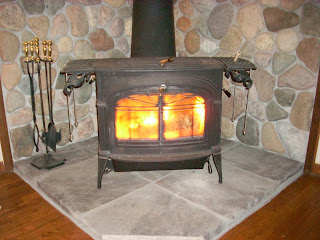