I had an unbelievable turn of good fortune a week or so ago:

I went for my annual physical and :( had to go to our local pharmacy afterward to get back on my high blood pressure medication. Now, downtown Park Falls is undergoing quite a bit of road construction, and I had to park some distance from the pharmacy and walk through the back alley to get there. After I got my medication and was on the way back to my truck I spotted the new bakery that opened a few months ago. It was open! So I decided to check it out and buy something sweet for Tom.

As I walked into the bakery I noticed that the owners were turning part of their space into some sort of yarn/craft area. It was obviously not finished, but I already liked it. There was a gorgeous spinning wheel there that I thought was part of the decor. I said, "I like your spinning wheel," and the bakery owner said, "It's for sale." I literally stopped dead in my tracks. I held my breath and hoped the eagerness didn't show on  my face. I mentally crossed my fingers and casually asked, " Oh. Well, how much do you want for it?" It turned out that the spinning wheel was being sold for another woman and the bakery owner knew nothing about spinning wheels or how much the wheel owner wanted as she had just received it from the owner that morning. My Providence detector started sounding loudly in my brain. So, I decided to take a chance and left my phone number for the wheel owner to give me a call. I bought Tom a cinnamon roll and went home. (Yes, I had a raspberry strudel!)

Later, the wheel owner called. We chatted a bit and then she told me she wanted $200 for the wheel and the spinning chair that was with it. I was ecstatic! I told the lady I would buy the wheel and chair for that amount and that I would meet her the following Tuesday after the bakery opened.

That Tuesday the wheel owner asked me if I wanted the wool she also had for sale. I told her I would have to see the wool and then it would depend on how much she wanted for it. She took me and the bakery owner's wife a few doors down the street, through the back of the business there, and into a large garage that was filled with all kinds of stuff that was for sale. She led me to a corner and kicked a plastic bin filled with various rovings. Then she kicked another bin and said she would throw that one in, too, for $15. About that time my eyes fell on a large Ashford drum carder that needed a belt and was sitting by its lonesome on a table and I asked what she wanted for it. She thought for a moment, then said she would give me the two plastic bins, the drum carder, a new in the box Harrisville warping board that just needed to be put together and the wood oiled, and a Harrisville rug loom with shuttle, all for another $100. I thought I died and went to heaven. I said, "OK," and we all went back to the bakery and celebrated with coffee and delicious pastries.

I would have loved to have stayed longer, but I had to get back home to take care of Lara, so the ladies helped me load the truck and off I went. When I got home and started going through the plastic bins, the good fortune kept coming. Among the wool rovings were luscious bags of llama and merino fibers, and in the second bin were one pair of antique and one pair of new in the box hand wool carders, a yarn swift, a Lazy Kate, two niddy noddies, several bobbins, extra spinning wheel maintenance parts, books on spinning, and I don't remember what else.  I just couldn't believe it. I was SO happy. That night I went on line to The Woolery  and ordered some extra drive belts for the wheel and the drum carder. I think God must have wanted me to have these things.

The spinning wheel is an Ashford Elizabeth. The chair matches it. 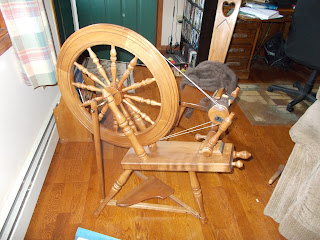 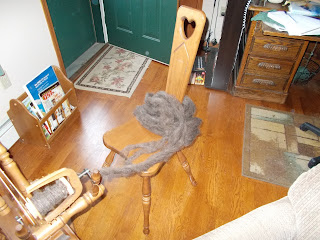 Here is the drum carder. When I can I'll get a packer brush kit for it. 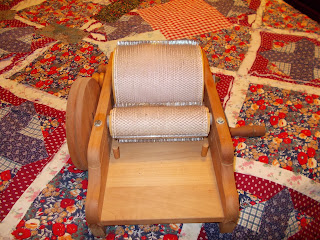 You know what the best part of the day was?  I made some new friends. Thank you Pam, Heather, and Mike!


Posted by ElderberryWine4u at 10:34 PM No comments:

Wow, I can hardly believe how long it's been since I last posted! The time truly has flown by and there is a lot to update here. Let's see, where shall I begin . . . .

Since January of last year I have lost 44 pounds and counting. Hooray! I'm down three clothing sizes. I was a bad girl, however, and stopped taking my high blood pressure medication, but I am now back on it and will not do anything that stupid again.

I lost my sister, Anna, to pancreatic cancer last October, shortly after her 59th birthday. That totally sucked and that's all I have to say about. Second Saturn returns can be the pits.

Then, in November, I went to check on Dad and found him lying on the floor and no heat in the house. He was stiff as a board and did not know me. He wound up staying in the nursing home till this past March and was happy as could be when he came home just before his 87th birthday. He now has nurses aides and therapists coming to visit him regularly, and my sister, Mary, was finally able to get in the house and have major renovation done. 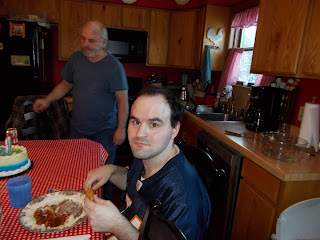 Our Sarah, who works for the US Forest Service down in Arkansas, has decided to add Florida wildfire fighting to her resume. We are very proud of her!

Things are hopping here at the farm, too, but I'll save the updates for the next post. Talk to you soon. Until then, Be Safe and Well!

Posted by ElderberryWine4u at 10:57 PM No comments: