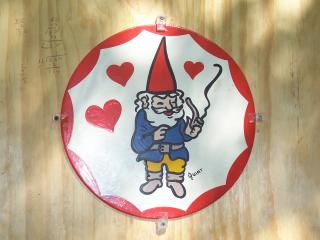 It's hard to believe that we've been in our new home for six months now. I still need book cases and kitchen storage, but the majority of our belongings are pretty much in place and the house is beautiful!

I love looking out the windows in the early morning and evening -- you never know what you'll see. One morning Tom and I saw a family of sand hill cranes behind the house. They walked quickly into the woods heading toward the north marsh. Foxes and deer seem to prefer the east marsh. Right after we moved in, two pair of pileated woodpeckers and a throng of finches came to our bird feeders, and for a while I think we had a wood thrush with its haunting evening song. In June, a wood chuck waddled out of the marsh and checked out our bar-b-que grill. If it noticed Tom and Ed sitting in lawn chairs, it didn't react, but only stood on hind legs to sniff the ribs cooking, then waddled back down to the marsh. I really need to get a good camera!

I can remember chomping at the bit once we moved to the house to start executing the farm plan that I spent 15 years researching and putting together. I had a whole list of tasks I was going to accomplish this first year. Ha, ha! Boy, did I get a dose of reality! The farm plan hasn't gone out the window, but it is being mightily edited.

While nothing is 100% completed, we did manage to tack up the wire fence around the field where I will have my market garden. It isn't pretty, but it was good enough to keep the so-and-so's with ATVs from tearing up the field any more. We also wound up getting the Dominique chickens -- the laying flock wasn't supposed to be started until next year, but I was afraid I wouldn't have the money so I went ahead and ordered 25 female chicks from Strombergs. My dad told me to keep the chickens close to the house (I was going to put them in the market garden field) so we picked an area close enough to the garage that I can run an electric line out to the coop if I need to, and Tom helped me put up the coop. Except for a coat of paint and some hay bales to help insulate it against the cold, it is pretty much done. The chicks love it! My sister gave me a cute gnome hex sign that she bought at a craft show and I put it on the door below the St. Benedict crucifix I also affixed to the wall. I have just finished building a "winter pen" around the coop for the chicks to run in, and I'm working on a portable day range shelter for them so I can day range them in the market garden field next year. And speaking of the market garden field, while we have the fence tacked up, I still need to build a gate! I did manage to plant the orchard: 8 heirloom apple trees, two pear trees, 4 Bali sour pie cherry trees, 20 elderberry bushes; and in the second section: 25 McDonald rhubarb plants, 25 Bohemian horseradish roots, 6 Pixwell gooseberry plants (I happen to like Pixwell), 6 Red Lake currant bushes, 50 Latham raspberries and 100 Jersey King asparagus plants. And, I have to admit that I didn't water everything as I should have so when I get back out there to winterize everything, I'll see what the damage is -- I may have to buy new stock next year, and if so, it's my own fault. I know better.

Yesterday, Tom helped me turn over the next half acre section that I had planted the end of June with buckwheat, some heirloom potatoes and a package of sugar pumpkins. (My BCS 722 tractor was supposed to arrive the end of April but I didn't see it until the first week of June -- not enough time to properly prepare the ground and plant the garden I wanted to have this year, but I just had to plant something!) And Ed and I put down 100 pounds of lime and broadcast about 60 pounds of oats and alfalfa for green manure to be turned under next spring. Boy, did I feel good when that was done! I still need to cut the grass again (I cut it in June and used the brush cutter attachment for the BCS), but this time I'll rake it up and make a hay stack in the chicken's winter pen. I have cleared about half the duff layer away from the woods in front of the house (part of my fire prevention plan gotten from the wood lot management conference I went to in April through the Price County Ag Extension), and we tilled a garden patch for Tom. My high tunnel is still laying unbuilt and the wood shed hasn't been started yet, but all in all, for only being in the new house for six months we have accomplished a good deal. And even though my farm plan is being revised, everything we've worked on this year is somewhere on the plan, and it is great to be able to have that plan as a guide.

I have been going to the Direct Marketing meetings held at the Price County Extension office and I put the farm in the Price Direct brochure. Unfortunately, that was before I found out I wasn't going to get my tractor on time and wouldn't have a garden this year. I felt horrible when an elderly couple pulled into the drive and I had to tell them I had nothing to sell this year. But my spirits lifted yesterday while I was putting down the lime when out of the blue a man stopped on the road and asked me about what I was doing. I explained to him what we had planted in the field and what we were planning to do as a farm, and he said that he and his family come up to our location every year and will plan on stopping to buy product from me. Whoopee! The work is hard and every muscle aches, but I love being a new farmer and carrying on my family's 112 years of farming on my portion of our family's 1991 Century Farm, possibly the last Century Farm in Iron County, Wisconsin.
Posted by ElderberryWine4u at 7:00 PM 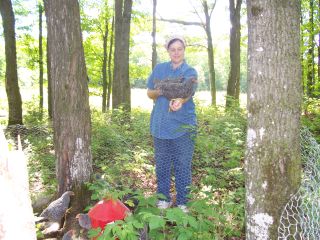 Posted by ElderberryWine4u at 6:52 PM