Well, there is lots happening and I'd like to share some good links with you.  The first one is information about an upcoming Webinar that relates to Fresh, Local Foods.  It looks like there will be some discussion about land use protections for farmers markets.

The USDA has a new web site that gives loads of statistical information relating to US state counties population to food access.  When you go the web site, select a state.  If you know where the county you are interested in viewing is located on the map that pops up, click on that area for more specific information.  There is also a legend on the left side of the page where you can specifically select certain areas of information you  may be interested in and the map will automatically adjust to show you the data.  Pretty neat if you are interested in developing local food access for an area.  http://ers.usda.gov/FoodAtlas/

Lastly, some of you may know that I am very interested in small scale production of ethanol.  Tomorrow night on Blog Talk Radio, Steven Harris will interview David Blume, author of the book,  Alcohol Can Be A Gas.  That book is definitely on my list of Best Books To Read.  Catch the interview  on Feb. 18, 2010, at 8:00 p.m. CST  http://www.blogtalkradio.com/knowpub.

Dad is getting stronger, thankfully, and tomorrow my sister will be taking him to the doctor so I will have a chance to catch up on housework here and hopefully take Lara into town to get her hair cut (if Laurie can fit us in her schedule).  The good news is that the bowling ramp the Salvation Army bought for our Special Olympics agency (and Lara to use) has come in, and on Friday the Park Falls Herald newspaper will meet us at Feit's Bowling Lanes to do a story about the ramp and maybe take a picture of Lara with it.  She will be so happy to finally get to bowl with the other kids.  Our agency manager has his hands full with changes in his work so he will not be able to devote as much time as he would like to our group for a while.  He would like us to get the kids bowling again and needs someone to set things up.  Since we are still running with Dad, I would like to wait a few more weeks, but we'll see how it goes.  I need to  talk to him anyway.  Bowling is the one sport all of our young people can do and I would hate to see them get tired of it.  I think taking a good break between bowling sessions prevents boredom from setting in.

It was a pretty nice day today.  The sun actually shone this afternoon for a while.  The temperature inside the chicken coop almost got up to 40F, and the ladies are starting to lay more eggs.  I will be composting what's left of the winter eggs and scrubbing down the egg frig, and I have been thinking about a better system for keeping track of the eggs that go into the egg frig.  I felt terrible when my neighbor, Lynn, told me she had an egg from me that floated.  I thought I was doing a pretty good job of rotating the eggs, so I don't know if the egg was somehow bad or if it was truly old.  Anyway, I am going  to mark the cartons with the date they are packed so it will be easier to follow a FIFO (First In First Out) system.  With Spring coming on the egg shells will be getting thinner and easier to see through, too, so I will worry less about having eggs with blood spots in them get by me when I candle the eggs.  Eggs with blood spots tend to occur more with older hens, too, so I plan to butcher these hens this coming Fall and sell them for stewing hens.  I haven't ordered my replacement chickens yet because it is going to be a tough choice for me as to which breed of layer I want to get.  I really, really like both the New Hampshire and Buff Orpington hens I have.  For the meat birds, I will definitely go with the Buff Orpingtons.  They are slower to mature than Cornish X-ers and eat twice the food, but I have been very pleased with the flavor and presentation of the carcass.  I've had no complaints from customers about them either.    My favorite chickens so far, however, are the Dominiques.  They don't clean up as nicely as the Buffs do because of the barred feathers, but as for foraging  for a majority of their food and taking care of themselves, those Doms are sharp!  In any event, I'll have to decide what sort of hens to get before the hatcheries are all sold out.

I will have to keep an eye on the daily temperatures now so I don't miss the opportune time to tap some maple trees for this year's syrup.  We like the smoky taste of our syrup.  So do Dad and our Soldier Girl! 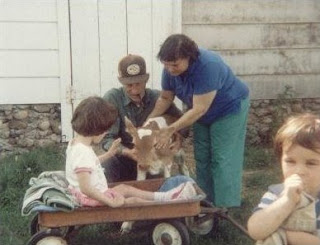 Dad and Mom showing Lara and Ed a new Guernsey calf  (circa 1991)
We had a bad scare last week with my Dad -- he is is the hospital now recovering from a "rare type of pneumonia" (I take that to mean H1N1 D225G/N  because of the symptoms Dad was showing, though I'm not privy to his medical records because of HIPPA laws and can't be certain that it was, in fact, H1N1.  Still, I do know from keeping abreast of the latest information about the pandemic that cases of H1N1 in the elderly are being underreported and listed as pneumonia instead of H1N1.  See, "In The News" section at  http://www.recombinomics.com/ [the story from Iowa]).  The doctor told him that he is "a tough old bird" and that he (the doctor) didn't know how Dad even walked into the hospital.  His lungs were filled with blood clots and fluid, and he was in heart failure, which the doctor says is permanent.  The doctor told us that if Dad made it through that first night, then he had a chance.  And I'm happy to say that he is still here.  When Dad first got to the hospital, the doctor in the ER asked him what his problem was, and Dad quipped, "Figured I'd stop here before they called the mink farm."  Well, not having lived the majority of my life in a rural area, I had to ask my sister, Mary, what that meant. Supposedly when a farmer has a cow that dies on the farm for some reason, the farmer used to call the nearest mink farm, who would come out and grind the cow up for mink feed!  Now, Dad is on the crabby side -- a good sign -- because he hasn't been able to smoke his pipe.  (He'll be 80 next month and I doubt he's going to quit smoking!)  He is very weak yet, and the hospital is still not letting him out of bed, but the rest will do him good.  I'd like to find some raw milk for him to drink -- that will heal his lungs up in no time.  Did you know that back in the '40s when people with TB were sent to sanitoriums that they were given raw milk to drink because raw milk healed lung tissue?  You don't hear about the benefits of drinking raw milk  in the news stories chronicling the direct sale of raw milk to consumers issue, do you?  But then again, Big Pharma doesn't want you to know about natural remedies that work, especially ones Big Pharma can't control access to.

On the way home from visiting Dad in the hospital, I picked up two 45 gallon plastic garbage cans to store maple sap in and a couple of big bags of organic seed starting mix.  I will have to overhaul the basement -- Ugh! -- before I can get seeds started, what with all of Sarah's stuff all over the place.  I could really use a couple of shelf units.

On a lighter note, today is my Ed's birthday!  He is 23 today; I can't believe it.  Ed has always been a good kid, and he is a wonderful young man.  Autism has barred him from many life experiences, but through it all he has always been friendly and willing to do most things you try to teach him (he's afraid of the chickens though).  Mostly, Ed likes splitting and stacking wood for the wood pile.  He does a good job of it, too. Tom wants to make homemade pizza tonight for Ed's birthday supper, and we bought him a nice chocolate cake.  Happy Birthday, "E-Man"! 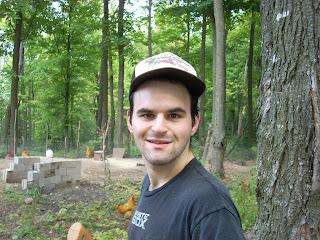 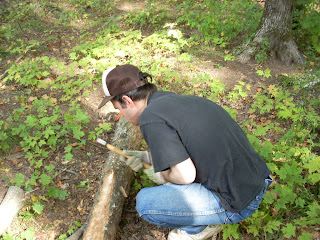 Ed Scraping Bark Off A Maple Pole
We are having light snow today. For this locale I'm thinking that overall we are low on moisture. I feel for the people out East who are getting pummeled with snow storms and expecting close to another two feet of the white stuff.  I am reading about lots of high tunnels collapsing under snow and ice weight.  I hope all of you affected by these storms are prepared for power outages and have food stored.  Be safe and well!
Posted by ElderberryWine4u at 1:31 PM 4 comments: