The Leaves Have Flown

I can't believe the end of October is here again.  Happy birthdays go out to our friends, Bill (Tom's Air Force buddy) and Pat (Carrie's mom).

Tom helped me fix the road side facing fence in the field before the ground got hard.  The fence looks alot better!  I didn't realize just how many fence posts were down!  I have been trying to figure out how many 6' and 8' fence posts I'll need to replace the creek side of the fence next spring.  Cutting poles in the woods will make for good exercise before the snow gets too deep.  And speaking of snow, we had our first snow on October 5th.  The weather went from balmy -- 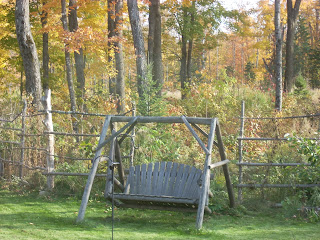 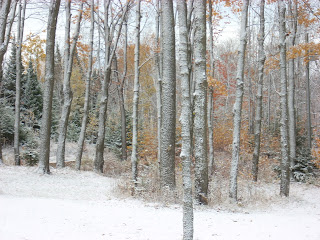 in a matter of hours.  Happily the snow melted quickly though the temperatures have steadily declined.  When I got up this morning it was 18°F.

The chicks are getting big and nearly feathered out.  I have given them the run of the coop and leave the door open in case any want to venture out into the yard. 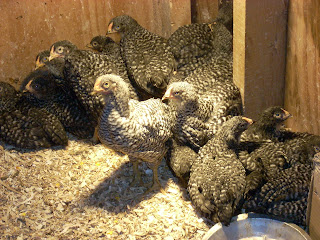 The bigger hens are not bothering the little ones.  In fact, I have two hens that insist on staying with the chicks and laying their eggs in a corner of the coop near where the smaller chicks like to congregate.  They coo and cluck while some of the smaller ones watch them build their makeshift nests.  I am surprised that the hens are laying.  With sunlight hours decreasing I did not expect to get any eggs till spring.  The eggs are too small to sell yet, but we are happy to eat them.  Even though they are tiny, what a difference in taste to store bought eggs! 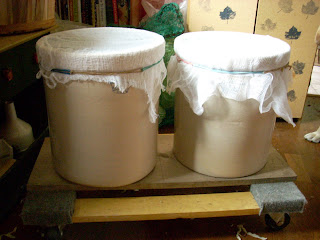 I canned up my sauerkraut.  This year I tried using plastic bags filled with water to seal the kraut under the brine.  It worked very well on one crock, but the bag was leaking on the second crock and I had to replace it.  I worried about the brine being watered down, but because the kraut had only just started to ferment, I decided to leave it alone and the batch turned out fine.  In the first crock I didn't even need to remove the top layer, but I skimmed a bit off anyway just to be sure the kraut was ok. You readers sure leave some great comments!

I also went on my yearly trek to Bayfield in search of apples. (I forgot to take my camera so no pictures this year!)  I was not disappointed.  I came home with three bushels that went into apple pies and canned apple slices, apple sauce, apple juice and apple jelly.  Two bushels were "seconds" and sold for half price, and I bought one "first" quality bushel for fresh eating.  Since I was in "canning mode" I took the last of the hot peppers from the greenhouse and tried making some hot pepper jam.  Oh, yeah.  It's good.  Hot, but good.  Then I dug up some horseradish roots and made some horseradish.  It came out pretty mild, but that's ok. 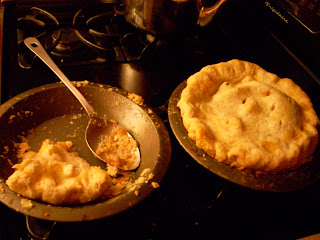 Tom decided to dress up the fireplace so we hired our neighbor, Scott Tomek, a stone mason, to do it for us.  He did a beautiful job! I could feel the feng shui improve as he worked! 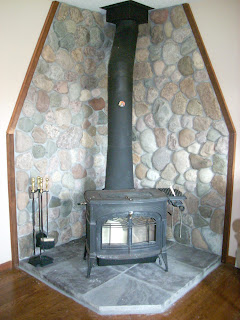 Say, I found a neat You Tube series from the BBC called Wartime Farm.  It's very enjoyable and broken into hour long segments that make it easier to watch.  I learned a lot!  It was amazing what the farmers in Britain had to put up with and did during World War II.   Food for thought . . . .

The wild rose hips are pretty hanging on the bushes.  I decided to leave them this year for the birds instead of collecting them for tea. 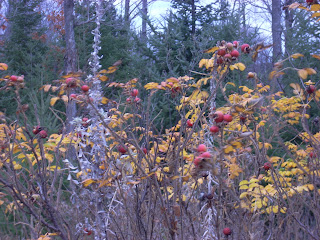 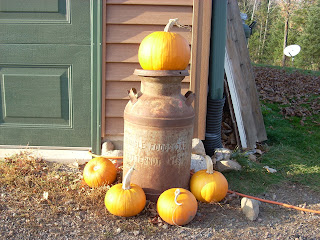 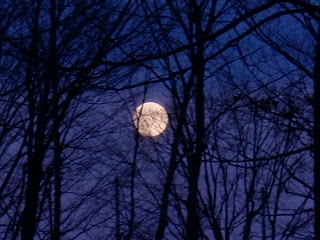