It has been busy here.  My seeds started at the last new moon are ready to be potted up and put on the new seed starting stand I built (see a couple of posts ago). I'll be starting more seeds shortly to take their place.  By now I normally would be planting directly in the garden boxes, but we are still getting plenty of snow -- 3" here and another 3" there, seemingly neverendingly -- and my gardens are all buried.  My fruit trees arrived early and I was able to heel them into the ground during the last warm spell (thank you, St. Lawrence Nursery!), and while the hot and dry spring I expected has not materialized, I do think that when the warm weather does show up it will come suddenly.  Thank goodness for muck boots!

The rocket stove I built for boiling down the maple sap was not getting hot enough to boil the sap down quickly, and I didn't have the time to mess around with it, so I reverted to my old standby set-up: 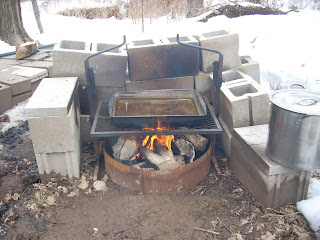 Filling my big pots with sap and burying them in the snow works out great. The sap freezes overnight and in the mornings I lift out the ice that has formed.  Then I boil down the remaining sap which cooks down quicker because there is now less water in the sap. As each pan boils down to 1/3, I pour it into another pot (the one sitting on the bricks) and take that into the house to finish boiling down on the stove after we eat supper.  This isn't my preferred way to boil down sap, but until I can get a decent "sugar shack" built, it will have to do. Working without a sugar shack puts me at the mercy of the weather; if it is too windy I won't start a fire, and I can't boil sap if it is raining or snowing too heavily.  So, it takes a while to get the work done, but it is worth it. 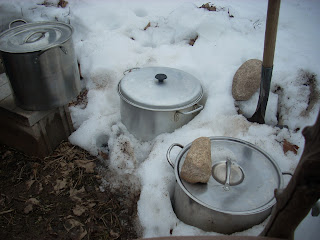 Believe me, it takes a lot of work to get this gallon of syrup. 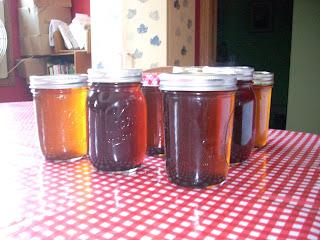 The good news is that today the temperature is up and the sap is really running now.  I hope to net us at least another gallon. Hopefully I can keep up with the sap.

Earlier this month there was a ham "super fest" at the AES store down in Milwaukee.  Since I hate driving in Milwaukee, I decided to participate in the fest with a phone call.  So, I finally bought my ham radio! It is a Yaesu FT-857D.  I bought a Bencher Morse key, a Comet UHV-4 antenna, and a 45 amp switching power supply.  So far I have been able to figure out how to set up the CW (Morse Code) training and practice features, but that's about it.  I am still trying to figure out how to just tune the radio so I can  listen to how other hams operate on the 2 meter band.  I think I need to read a book about basic electronics.  Maybe then the radio wouldn't seem so complicated.  I am afraid I'm going to accidentally fry it from my own stupidity.  In the meantime, I keep studying. 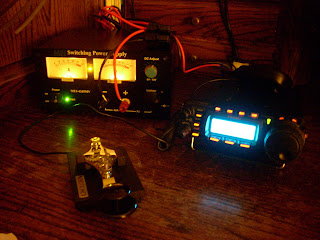 Well, time is short and there is much to get done around here, so I'll let you go.  Take care!

Posted by ElderberryWine4u at 1:38 PM No comments: