Time to Take a Breather Yet?

Well, the first thing I want to do is post this video of our Sarah graduating from Southern Illinois University last May. It only took me this long to figure out how to upload it!

Yesterday Tom took our soldier girl to the airport as she has to go back overseas. I can't wait for her to come home for good! I hope she had a good rest here. I have been really working hard on getting the chicken coop ready for the chickens. They are almost fully feathered and boy, I will NEVER brood chickens in the house again! What a mess! I built two new doors for the chicken coop and checked it all over for "snake" or other varmint entrance points. I think I did a good job on the doors. They are nice and heavy and will keep the wind out. I have to make two more nest boxes, a feeder, and two feeder stands. Eddy helped me lay down three bags of wood chips, so when I put them out in the coop I think the chickens will be very happy. Tom added a third roost for me, too.

I also when and talked with my neighbor, Larry, (the sawyer) about getting wood for the skid. I'll have to wait two weeks for it, but I think the chicks will do all right in the coop for the time being. I am going to keep them in the basement until this next winter, er spring?, storm is past. We are supposed to get 4-7" of new snow starting late tonight. The temperature today is supposed to get in the mid- 40's so I will try to finish getting the fence up. I will post some pictures as soon as I can. Have to run. Talk to you soon!
Posted by ElderberryWine4u at 10:51 AM No comments:

Tom is 59 today! I made him his Diabetic New York Style Cheesecake and we are having ribs for supper tonight to celebrate. I remember when I first met him back in 1973; he had just come home from Viet Nam (actually Thailand) and he looked like a pirate. I couldn't resist! We were both going to the U of I at Chicago. Back then the U of I was called "Circle Campus". He was going to school on the GI Bill, and I was a flaky long-haired hippie chick in pre-med whose standard garb included "grannie" dresses, gold-rimmed glasses, and hand-tooled leather clogs. Long time ago!

Today, Tom went to the hardware store for me and got me a 3 to 2 electrical plug adapter so I could hook up my plant lights to a timer. I watered everything and wrote down what I planted. Here's the list so far:

Can you tell I'm looking to expand my herb garden? Many of the herb seeds came from Horizon Herbs so I have no doubt those will sprout because the seed quality from Horizon is always excellent. I have lots more veggie seeds I want to start, but they will have to wait till I can move this batch out to the high tunnel. There are many new varieties this year and I am really hoping they do well for me.

Bernie called from Fifield Seed N Feed to let me know the chicken feed is in, so I'll run and get that tomorrow. I think I'll take my lumber list for the chicken skid and get an estimate on the materials.

The weather is dismal and damp today. We are supposed to get 10-15 new inches of snow tonight and another 5-6" tomorrow. What a winter!
Posted by ElderberryWine4u at 3:08 PM No comments:

Where Did the Day Go?

Today was one of those days that just flew by. Early on I got a call from Mt. Healthy Hatchery, and they were great! They gave me a credit for the chicks I lost so I will redeem that credit on the next batch of chicks I order. Most of the day was spent starting seeds. Oh, Man, I can't believe all the seeds I started! There are going to be A LOT of very hot peppers this year. Twelve different tomatoes, two kinds of cucumbers, lots of herbs, cabbages, collards, Wong Bok, sweet peppers, onions, celery, and I can't remember what all else. If I can get the plastic off the garden boxes tomorrow, I'll start several different kinds of lettuces and greens, radishes, and peas in the boxes. The middle of next month I'll start all the different squashes, gourds, melons and pumpkins. All of the planting stock should be coming then, too. I need to get out to the high tunnel and build that trellis.

Tom went out with me and we collected the maple tree sap together. He wanted to have an idea of how much we get from each tree. It varies with each tree, where the tap is, and how warm the temperature is. I would say we already have about 15 gallons. I'm glad I bought that second garbage can as a "holding tank".

Our Sarah called from Afghanistan last night. She is still planning to come home on leave on either the 13th or 14th. She will give us a call when she gets to Atlanta and will tell us when she'll arrive at Rhinelander Airport. I can't wait for her to come back to the States permanently! I can't wait for ALL our troops to come home for good!

Well, I'm going to leave off as my back is killing me from standing all day. Talk to you soon.
Posted by ElderberryWine4u at 10:24 PM No comments: 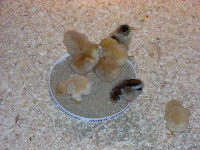 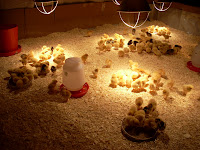 We're back in the chicken business! The "chickipoos" came this morning. Most survived the snow storm in Ohio and -25F temps here. I did lose two New Hampshires, two Arucanas, and seven Orpingtons. But, gee whiz, those babies were COLD when I opened the box. I was so glad I had turned the brooder lamps on to heat up the brooding area before I left for the Post Office. As it was, I really thought I would lose a lot more when I got back home and opened up the boxes. It took quite a bit of individual warming to get a lot of them to stop shivering. Most are doing fine now. There are maybe three that look a bit "pukely" (pronounced "POO-kly" -- one of our family's "made up" words), but I have to say I am very satisfied with the hatchery -- I used Mt. Healthy in Ohio this time (http://www.mthealthy.com). Now that the chicks have warmed up and porked out they are peeping contentedly and exploring the brooder. The hatchery sent me Buff Orpingtons for the meat birds, and the 25 free chicks are Arucanas -- and of those, I think four are hens. Those Arucanas are the cutest chicks. They look like little chipmunks! The Orpingtons are golden yellow, and the New Hampshires are red-gold. I am SO happy! Bernie from the feed store called and he can't get me the chick starter, so I'll have to try and find some from somewhere else; I really don't want to continue to give the chicks just the game bird starter. By the way, Bernie gave me permission to put his business card on the blog, so if you are looking for a good feed store, give Bernie a call! (Unfortunately when I tried to scan his business card, the color and print isn't very readable, so here is his phone number: 715-762-2667. Seed N Feed is located right on Highway 13 in Fifield, next door to Wheelway Auto.

Here are a couple of pics of our Ed and a New Hampshire chick: 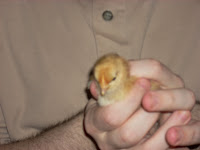 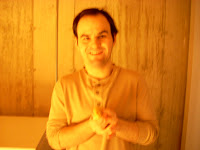 I listened to the NOAA weather radio this morning. It will be -20F tonight and tomorrow night, but the day temps will be between 30-40F for the rest of the week. That'll be good for sap run. It also means I need to get out and cut the mushroom logs! I have two trees picked out to use for the mushrooms. I bought the mushroom spawn from Mushroom People (). That should be coming before you know it.

On the Local Food Atlas front, I am waiting for the info from Miriam Grunes. She sent me an email telling me that she is behind with some deadlines and that she has not forgotten me. Soooo, I will go ahead with my news article and send that out. Yesterday I had a bit of luck here because one of the locals (Dave Minisan) is running for Town Board Supervisor in April, and he just happens to be involved with the Mercer Food Pantry and Mercer Lions Farmers Market -- both of which I didn't know existed, so I will definitely be contacting him regarding listing in the Atlas.

Well, tomorrow, I'm off to hunt for chick starter, and while I'm at it I'll look for some ag lime, bone meal, and peat moss for making my seed starter mix (I already have the Perlite from Harris Seeds -- did you know that Harris has organic seed?) The chatter on the list servs is indicating a marked increase in the demand for seedling veggies and herbs. I think I may get some extra seeds started.

Thanks to GeorgeW from the HGG (Heirloom Growers Garden) list serv for sending me the apple tree scions and seaberry seeds! George found an unknown old apple tree on an abandoned farm that was being demolished, and he cut scions from the tree and offered to send them to interested persons on the list. He had eaten apples from the tree and said they were quite good. So I thought I'd take a chance and get some. He graciously sent me six scions, and I miraculously was able to get some Antonovka rootstocks from Fedco. I am keeping the scions in the refrigerator till the rootstocks come probably the middle of next month. I hope the grafts take; I've never tried grafting before though I've watched it being done and the two sites I've visited regarding how to do it conflict with respect to scion care. It doesn't look too hard.

I have lots to do so I'll leave off for now!
Posted by ElderberryWine4u at 2:51 PM No comments: