Well, I'm ready to run around the house shrieking because of our computer trouble.  It all started when I was accepted into a weight loss for rural seniors research study from the University of Kansas that our clinic is partnering with. Part of the study requires video conferencing. Well, my computer has no camera and runs on Windows 7. So, I bought a camera and tried to set up Skype (which won't redeem the prepaid voucher I bought). Then because my computer frequently blue screens on me Tom and I decided to buy a new lap top computer. That one runs on Windows 10 and has a camera built into it. And, because I like to read a lot I bought a little Kindle Fire to ease the wear and tear on my poor old desktop. OMG! Trying to get everything to work together has been a nightmare. Now my old computer constantly crashes Firefox, and it and Internet Explorer are besieged with pop-up ads despite my installing the latest Kaspersky Total Security. I finally downloaded Google Chrome on the old computer and so far I can at least function. (I am able to be posting this!) My Kaspersky Total Security tells me everything is fine as does Windows, but I can't seem to get rid of the annoying pop-upson Firefox and Internet Explorer. I even reset the computer to an earlier time and reinstalled Firefox. At least the Kindle Fire seems to be OK. Now I have to figure out what is wrong with Skype (when I chatted with their people they couldn't find anything wrong even though I'm getting an "internal error" message). My husband thinks the Skype problem has to do with our being located in an area where cell phones don't work. I just don't know how that would affect a computer program. Ugh! Anyway, progress is being made slowly but surely and we are being dragged kicking and screaming into an updated computer era.

We are well into mud season now and most of the snow is gone though we could very well see more of it. May 15th is the latest I've seen it snow here, and the cold will be here a while yet because the frogs down in the marshes aren't peeping. Our town has instituted the annual weight limits on the roads and will no longer give a permit to the garbage collector to collect our garbage so we have to take our garbage down the road a ways (about four miles) to a drop off point in Ashland County. You'd think we'd get some type of refund or credit on our contract for having to do this because, after all, we are paying them to collect the garbage from the end of our drive, but no, not a word from either the town or the garbage company about that.

I cleaned out the chicken coop on the first nice days we had, and the ladies and gents approve. They are having great fun scratching through the old bedding. When I can I will shovel it all into the trailer and haul it over to the garden by Dad's. He wants me to learn how to run the tractor so I bought a can of diesel fuel and when the grounds firms up I'll give it a go.

And speaking of Dad, Mary bought him one of those emergency buttons you wear around your neck that you can press for help if you fall and can't get up. And she was able to get him signed up at the VA in Iron Mountain for health care. He seems satisfied and liked his doctor. She told him he needs "eyes, ears, and feet" and they will get him glasses, hearing aids, and send him to someone to check his feet out. We got a kick out of the appointment reminder:  "You must report to . . .", just like military orders. And so long as he doesn't get hold of any alcohol, he's ok. He also just turned 86.

I started seeds out in the greenhouse earlier in the month, but yesterday I brought the trays into the house and put them down in the basement because we are supposed to get a really cold spell toward the end of the week. I am trying several new varieties of tomatoes and would hate to lose the seedlings to cold. The seed trays with all the herbs I left in the greenhouse because they like a couple of weeks of cold before they decide to sprout.  My sunflower tray was ravaged by a mouse -- twice -- so the last time I went to town I picked up some mouse traps. I am now out of Fat Mama and Maximilian sunflower seeds but did find a pack of Burpee's American Giant seeds in my stash so all is not lost for a sunflower border around the garden.

No pictures for you yet, but I hope to take some soon. I just love it when the tree buds start to swell. The sand hill cranes are making a racket down by the creek.

Well, I have to get back to trying to fix this computer so I'll let you go. I hope all is well in your world! 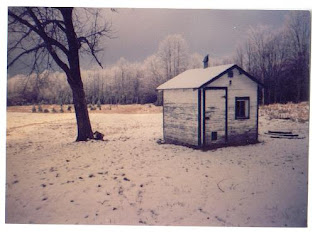 Posted by ElderberryWine4u at 5:27 PM No comments: