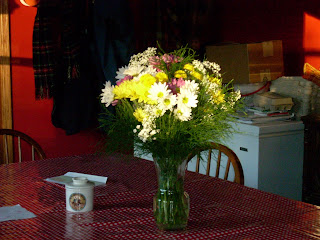 Tom and I had our 38th wedding anniversary on the 24th. We stayed at home and had a bar-b-que.  It was a nice day weatherwise and we enjoyed the quiet.
It has been horrible trying to get the garden in.  We've had visitors, Marshfield and other locale doctor's appointments, overly cool temperatures, heavy rain, household objects breaking, the dratted fox, and just about anything else you can think of.  My good temper is stretched pretty thin.
Yesterday I finally was able to get out to the field and assess the situation, and I was not happy.  My best garden section still has standing water in it, and the grass in the entire field is thigh high already. Today I hauled the BCS out to the field and struggled in the soft ground to first cut the grass where I decided to put the garden, and that wore me out for the day.  Tomorrow Tom has another another blood test and grocery shopping to do, the nurse's aide is coming to visit Lara, and a customer is coming to buy some eggs, so I don't expect to be able to get out to the field until after supper, but hopefully I'll get the tilling done.  I want to rake up the grass that's been cut and drop it into the swales I dug between the raised beds.  The first raised bed is all Jerusalem artichokes.  The second raised bed was where I wanted to have all perennial leeks and onions, but the leeks didn't make it through the winter. So, I will plant some rhubarb into the bed to keep the Egyptian walking onions company along with some herbs.  As soon as I get everything fenced in and planted, I'll take some pictures for you. Maybe I'll be able to take one of the peregrine falcon that regularly swoops over the field and big marsh.  No turtles, fawns, or snakes seen yet, but we seem to have a lot more Canada geese taking up residence in the neighborhood.
I've had three people stop by and comment on how much they like my brush fence, so I  added some new vertical posts and re-tied some of the cross posts. Guess I won't tear it down after all.  I strung new string along the part of the ladder trellis fence and planted my Grandpa Ott's morning glories, Scarlet Runner Beans, and Old Homestead Brown pole beans.  I transplanted the grape vines to train onto the fence so Tom won't run them over with the lawn mower any more, and there is one more to dig in.  Many of the herbs from the greenhouse got planted in one of the garden boxes in the back yard.  I also put the Sugar Lump tomatoes with those herbs and the Arkansas Traveler tomatoes were planted in the garlic box.  The rest of the tomatoes will go out in the field. I am seriously thinking of making two more garden boxes, too!
My sister would like to have a grove of choke cherry trees so last week when the trees were blooming in the woods I took a scouting walk.  I did find some choke cherry trees and noted where they were, but I also found something unexpected -- four wild plum trees growing right on the east side of the house.
﻿
With all of the grafted plum trees I've planted and now finding these wild plums, I think I'll learn how to make plum wine! All of my elderberries are doing great, too.
Here is a little tree that I just cannot identify.  It is a slow grower and there are several I have found in the woods around the house. It has pretty yellow drooping flowers on it that don't last long, but I have never seen any fruit on it. The bark is gray and smooth.  It seems to like growing in the shade under or near maple trees.  Any help with identification would be appreciated. 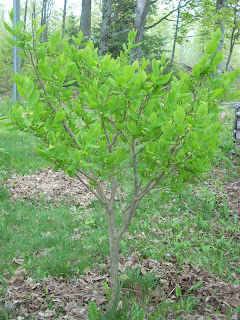 I'm not sure what this shrub is either. It looks like some type of berry. 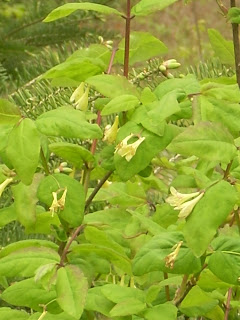 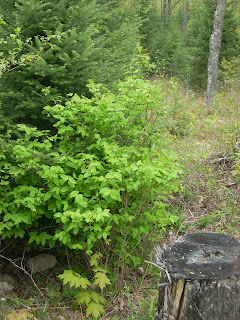 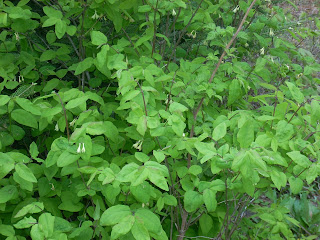 I am down to 15 chickens, but they are laying well.  Sears had appliances on sale so I bought a new egg refrigerator over the Memorial Day weekend to replace my dead egg frig, and now that it has been delivered and is running quietly and energy efficiently in the garage, I am one step closer to getting that egg license.

I am also down another 10 pounds in weight.  Yeah!  I'm getting closer to buying that tractor.

Well, there is lots to do here and not much time to get it all done in, that's for sure. Hope your gardens are doing well.  Be safe, well, and  Blessings to you all!

Posted by ElderberryWine4u at 8:58 PM 2 comments: