I have to admit I'm a wuss about hot and humid weather.  When the day temps start reaching into the 80's I go in the house and whimper. Cold drinks, a wet kerchief around my neck; I turn into a crab and hide in my shell.  I feel ill in hot weather and have a hard time breathing, so I elect not to unduly exert myself. I am grateful that I do not have to be out in such weather.

Late last evening I battled mosquitoes and waded through the forest garden to check on the melons, pie pumpkins, and winter squash. The sad truth is that of the three only the winter squash -- Blue Hubbard -- is even growing. The melons and pie pumpkins look like they were planted just yesterday. I can't understand it, but at least the big squash is happy. I think it is because I planted it in my hugelkulture bed.

I picked the last of the black and red currants to put in the freezer, and the handful of raspberries I gathered I added to a cup of nice homemade yogurt. It was a good snack. I will watch the raspberries closely as I have a feeling they will ripen pretty much all at once this year and I want to be sure I pick at least a gallon of them. The flavor of wild raspberries is hard to beat.

I pulled out one of my new books to read. I heartily recommend it if you are interested in saving your own seed. The Organic Seed Grower by John Navazio is the best book about growing for seed I've read since Suzanne Ashworth's Seed to Seed. This really is a must have book for your library shelf. This year I am going to try to overwinter beet, carrot, and rutabega roots, kale, Swiss chard, cabbages and collards to plant for seed next year, and I'll try to gather seed this year from just about everything else I can. If we are lucky and have a long Autumn, I may be able to harvest a lot of seed.

Lara and I did well at the farmers market again. We sold enough of the jam I made that I think it is worth the effort to make more to sell. I am going to make some different jams to add a bit more variety to the selection. We sold all but one of the spring cabbages we brought, too, so that was good.

Hope you all are staying cool!


Posted by ElderberryWine4u at 12:03 AM No comments:

Whew! I have to take some time to fill you in on what has been happening here at the farm.

First off, I forgot to tell you that Tom and I had our 40th wedding anniversary back in May.  We decided to celebrate by taking the kids with us to go see the new (totally awesome!) Mad Max movie. So like us. I was always a cheap date -- take me to an action movie, buy me popcorn, and I was a happy camper. Some things never change.

My sister and I went to a pasture walk down in Milladore one evening to see an organic farm. It was pretty cool. The family had been traditional row cropper farmers but a serious accident caused the family to rethink how they farmed. Over the course of a few years, with minimal equipment, the family transitioned to being a diverse, certified organic farm. They raise grass pastured beef, chickens, ducks, and turkeys. Everything they raise is bought by an organic marketer, and financially they are doing better now than when they were row croppers. The walk was well attended despite being held in the evening. The family was very down to earth and had an amusing cadre of farm dogs, too! One of the funniest things that happened was when we walked by the duck pen and the 136 ducks saw the woman farmer. There was this huge cacophony of duck quacks and a mad press toward the fence. The woman told us, "Aw, they see me and think they are going to get fed." I guess ducks are like any other critter. :) 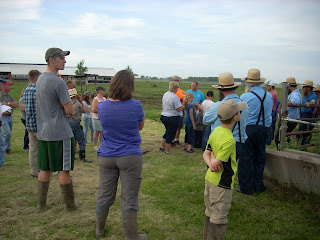 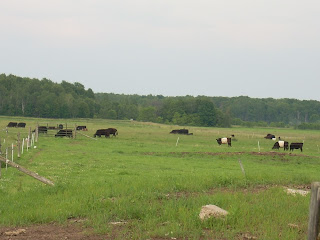 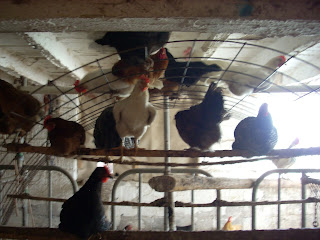 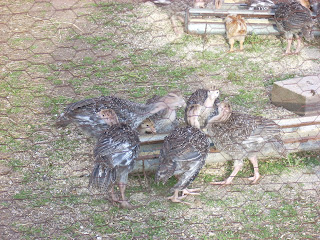 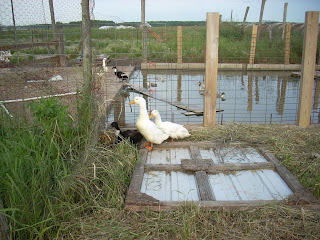 Back at our farm, while the weather has been steamy during the day with patchy heavy rain and too cool at night (we've have two nights down in the 30's) the garden is actually doing fairly well.  I have had no luck whatsoever with lettuce, radishes, and melons, but the parsley, red and green cabbages, collards, mustard greens, beets, and kale are doing great. The green bush and pole beans are finally starting to come on, and the cucumbers and summer squash are getting flowers now. My Green Arrow peas are just now producing when normally peas would be finishing up at this time. The green peppers and basil look pitiful, but the garlic grew gangbusters and the onions are filling out great. I have tomatoes planted all over the place and while there are no tomatoes yet, the plants are growing well despite the cool nights.  This year I planted Chadwick Cherry, Vintage Wine, original Abe Lincoln, and a very early variety simply named "1884".  I have been blessed with no insect or disease problems this year despite the weather.

So, Lara and I take lots of greens to the farmers market. Customers even call us "the greens people". We have been to the market twice so far. 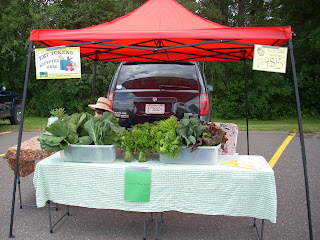 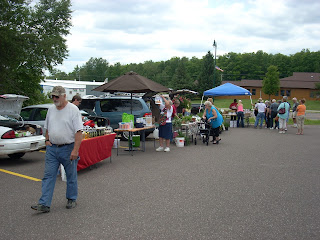 This week we didn't go to market however because the chores in the house and the garden were starting to pile up and I needed to make some time to take care of the work. I pulled the garlic and have it curing out in the garage. I amended the garden box the garlic was in and replanted it with rutabegas, lettuce (another try!), radishes, carrots, and beets. I picked the currants out in the forest garden and started cutting open some walk paths. Today I was in the kitchen making currant and strawberry jam to sell at the market. We may have some spring greens yet and some of the cabbages and peas should be ready to harvest for next week.

I wound up with 12 chicks that aren't so little any more. They are starting to hop out of their brooder box in the greenhouse so it won't be long before I'm able to put them in with the other chickens. Of course, before I do that I will need to whittle down the roosters and lazy hens in the main flock. Work never ends, does it! Well, busy hands make a happy heart, or so the saying goes. I think I'd rather take the time to  look for the bluebird of happiness. 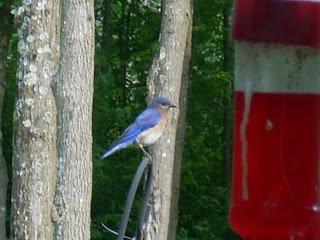 Talk to you soon. Be safe and Be well, Everybody!

Posted by ElderberryWine4u at 11:48 PM No comments: