Lovely Day for an Update

Today was an absolutely beautiful summer day! The weather was perfect; not too hot and not too cool. And, it was Lara's birthday. We celebrated by going to the Mexican restaurant in Hurley on Highway 51 for some excellent food, and then later in the day after we returned home, we had some Williamsburg Orange cake for dessert that I had made per Lara's request for her birthday. She opened her birthday gifts and talked with her friend, Carrie, on the phone. Everyone crashed. I feel like I'm going to pop. Not good for my diet, but a splurge now and then is OK. For a change, it was a day without stress.

This was a busy week taking care of doctor and dentist appointments. A trip to the feed store took up another day. And, of course, there is working in the garden. FINALLY it is starting to take off.

Here's before in mid-May: 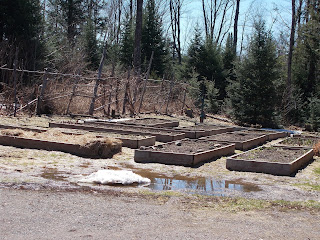 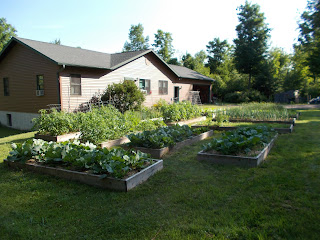 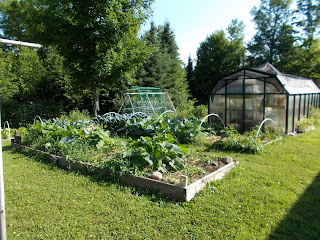 I actually have weeded these boxes three times now.

It was a job but I also got the fence erected around the big garden over by Dad's. I have potatoes, pumpkins and winter squashes, Moon and Stars melons, beets, rutabegas, Golden Bantam corn, Jerusalem artichokes, pole beans, and flowers in it that call my sister's bees, and that garden needs to be weeded again. I have to thin the beets and rutabegas and till the bare area I left for the squashes and melons to run in.  I'm ecstatic that no deer have gotten over the fence. There are deer beds in the grass around the garden so I know they have been thinking about getting in. I will have to take some pictures of the garden for you so you can see what I'm talking about.  Tom and I put up 7' deer fence over 6' posts. We used old t-posts from around the farm and pieces of angle iron Dad gave me. We decided to let the overhang be instead of tying it up with the thought that the deer might be spooked by the loose fencing blowing with the wind, and so far, it has been working. Two of the four fruit trees I planted died and need to be replaced, but I think where I planted the trees will work as an orchard area. The soil just needs a bit of work. Good spot for comfrey to do its magic, and I have been taking black and red currant cuttings and potting them up for new plants to add, as well. 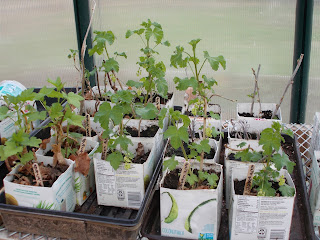 Earlier this spring I pruned the rose bushes and currants. Holy smokes, does everything look good! I think that despite the weather this will be a great year for fruit. I will be loaded with plums, black and red currants, blueberries, and raspberries. Even the elderberries, of which half the plants had to be severely pruned because of winter kill, are going to give some berries. And for the first time there will be some apples on the Honeycrisp apple tree. Half of my grape vines died right to the ground although thankfully they did not die and are sending out a new central leader, but the others are beautiful and climbing all over the newly repaired trellis fence. The hops are happily climbing the trellis fence on the far side of the garden. They are filled with drunken fat bumble bees. Ever see a drunk bee?

I have been harvesting some herbs this year, too. I dried a bunch of violet flowers to put in teas and soap. 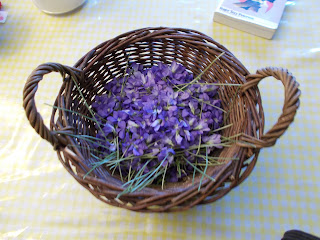 And German chamomile decided it wanted to grow for me and came up all by itself in the boxes where I transplanted all the rhubarb and the walking onions. I just love volunteer plants; they are like old friends you haven't seen in a long time that suddenly drop by to visit. I'll be cutting and drying St. John's wort, yarrow, and mugwort this coming week.

In the back yard the collards and kale are doing well enough that I will harvest some to take to the farmers market this Wednesday. I'm not happy that the collards that have grown are not the collards I thought I planted. I like the giant leaves on champion collards. Still, collards are collards I guess and when you are hungry variety doesn't mean much. It all looks the same in the freezer. It is a shame that everything growing is behind time about two - three weeks. I am concerned the season will be short and not everything will have time to  mature.

Tom and I have noticed all the wild trees that are flowering and fruiting.  We discovered three hop hornbeam trees at the edge of the back yard behind the Honeycrisp apple tree. They have beautiful white flowers that look like big hop flowers. All the lower branches of the trees have been eaten by deer, and when Tom looked the tree up in our tree identification book, it said that deer and lots of other animals love hop hornbeam flowers. Medicinally, it is also a great tree to have around. You use the leaves and flowers. The choke cherry trees are full of fruit and all over the place. It's no wonder we are being visited by all sorts of birds. We have the usual nuthatches, finches, robins, chickadees, and marsh sparrows, as well as orioles, blue jays, grosbeaks, and red wing black birds. We even have catbirds, Cedar waxwings, scarlet tanagers, and believe it or not, we actually had a meadowlark stop on the feeder, but it flew away before I could get a picture of it. I would have sent the picture to the newspaper if I had been able to get a shot of it. I thought meadowlarks were extinct. I discovered that they are not, but they are almost gone. Tom says the birds line up on the back yard trellises and nearest trees and wait for him to hang out the feeders in the morning. Spoiled critters! 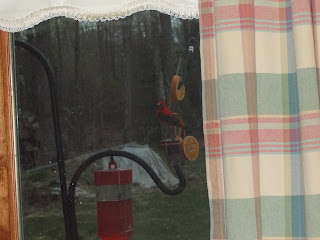 I got 19 chicks hatched out in the incubator, and after they hatched my big hens decided to go broody. I was going nuts there for a while trying to gather eggs, but finally one of the bantam cochins I bought last spring outlasted everyone as a biddy. The other day while I was out in the coop cleaning and putting away new supplies, I heard a "cheep cheep" that sounded like a new baby. I knew the incubator chicks while still small were too big to make that sound, so I looked around and sure enough, there was a baby sticking its head up through mama's feathers. Baby looks good and mama is still sitting on the clutch so I think more babies may be coming. 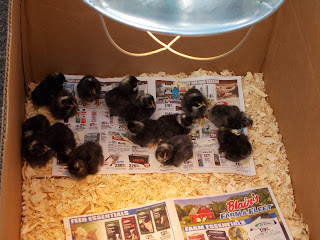 Well, it's time to go shut up the coop and take care of Lara. It feels good to have time to sit down and blog an entry. I hope you all are well and have your gardens planted.

Be safe and prepared!


Posted by ElderberryWine4u at 8:32 PM