Time to Work Outside

Well, the snow has melted enough for me to get out to clean out the chicken coop. Was that ever a job! I'm usually able to clean it out during the "False Spring" that comes in January, but this year the weather didn't cooperate. In fact, it got so cold that I added four bales of hay to the coop for some additional insulation for the chickens. The hay worked out well keeping the chickens warm, even when we had the -50F wind chill nights. But it took me two whole days to shovel out the coop. Now when the ground firms up a bit and the rest of the snow melts I'll have to cart everything over to the compost area for breakdown and use on the gardens next year. I'll sure get my five miles a day walking in then for sure.

I potted up a bunch of seedlings I started in the basement last month and they are coming along nicely. I have about 30 Brunswick cabbages started, lots of kale, cilantro, onions, and some flowers. I hope to move them to the greenhouse in the next few days. It's funny. In the Spring you find you have to "do this" before you can "do that". And before I can take the seedlings out to the greenhouse, I have to clear out all the yard "stuff" that I stored in it over the winter. Then I can go back into the basement and get my squashes and pumpkin seeds started.

Yesterday I went out to the forest garden and pruned the black currants and a couple of fruit trees. This year I'm clearing away a lot of the "weed trees" so the sun can better reach into the garden. It's too soon to tell if I'll need to replace any of the trees, but most everything looks good. I took 20 black currant cuttings and potted them up in the greenhouse. I really like those earthy black currants. Once you get used to the taste they are great. Try an apple-black currant pie; it's delicious! Anyway, I sure hope those cuttings take. The cuttings I potted up last summer and left to overwinter in the greenhouse have started putting forth leaves. Only two look like duds. Of that group there are six black currants and six red currant starts. If I get good at starting cuttings like this I may be able to sell them for extra income. That would be great.

It's mud season now and the roads are posted against heavy traffic. The snow is rapidly disappearing and we've had our first good rain. I can work outside without wearing a heavy coat, and the birds are starting to return and sing.

If only those black barred cochins I bought last year would sit on some eggs now . . . . 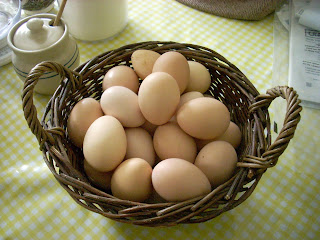 Posted by ElderberryWine4u at 7:15 PM