It's cold, wet, and bone aching miserable outside so I put on my nice grey sweater that I finished last year 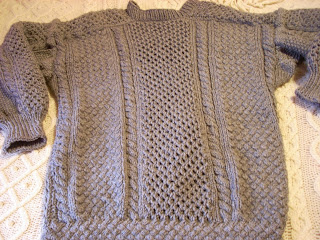 and am spending my time making a blanket in railroad knitting (a/k/a Tunisian crochet) with all of my yarn scraps. It is taking me longer to finish because I decided to embroider each section on each block in black outline stitch. It was a good decision because the colors are nicely highlighted by the outlining and the blocks are reminiscent of stained glass windows. I'll take a picture of it for you when it is finished.

Yesterday (speaking of yarn) I picked up my share of wool yarn from splitting the costs of a fleece with a woman I know in Phillips who used to go to the Phillips Farmers Market. She had the fleece spun at Blue Hills Fiber Mill and it is gorgeous. The wool is grey and the natural color of the fiber. I received different fiber thicknesses so I will make me a nice warm shawl (I have a thing for shawls), Ed gets a good warm hat with ear flaps, and Lara will get some nice warm socks.

The reading bug has hit me again, too. I am nearly finished with the totally awesome Gulag Archipelago and have finished The Forever War.  I'm half way through A Canticle for Leibowitz. This book is excellently written. It is a shame, but I think only someone raised as a Roman Catholic in the pre-Vatican II, Latin Mass era, can fully appreciate how that type of upbringing strengthens the cultural nuances of the story's core and makes for such an enjoyable read. ("Eat! Eat!" You have to read the book to understand why I was bug-eyed when I reached that part. . . .)

I have received the fabric to start Ed's Hobo quilt, so I expect to at least get that project started before the end of the year.

Elsewhere I have six chickens butchered and another six to go. My sister Mary had one chicken that "got away" when she butchered her flock so she said I could have the hen.  I retrieved the hapless one when she was asleep and back in the hen house that night and put her in with my flock. Since she is a hen I'll keep her for her eggs. She has adjusted well. I knew she would because she is bigger than my chickens who were extremely put out because of the stranger in their midst. It only took about three days before calm descended in the coop once more. I have scrubbed, scraped, swept out cob webs, and otherwise cleaned out the coop and "winterized" it with about six inches of fresh wood chip bedding. I had to take a scraper to the window because it had not been washed for a couple of years, but it looks great now, and the chickens can sit on their perches this winter and watch the snow fly.

I still have some fence work to do and the cutting back of weeds. Tom and I are waiting for good weather to go up on the roof and clean out the gutters now that most of the leaves are off the trees.

Twice already we've had snow fall but so far nothing has stayed on the ground.  The birds are busy at all the feeders though so I expect we will freeze up pretty soon now.

Since it is Halloween, I thought I'd leave you with a fun link to the complete broadcast of Orson Welles' famous radio program from 1938. Be safe Everybody!


Posted by ElderberryWine4u at 2:27 PM